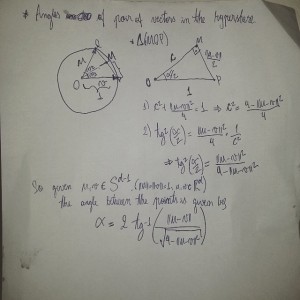 I stumbled across this trigonometric formula for high-dimensional vector in the (d-1)-sphere while proof-reading the last two LSH papers (“beyond LSH”, and “optimal data-dependent LSH”). It is an interesting formula because it present the angle between the points fully characterized by the distance between the points.

Suppose you have two high-dimensional vectors

. Take the center of the sphere and the difference between the vectors, so we obtain a triangle with two edges length 1 and one edge length

is on the opposite side of the edge

). If we take the bisector of the angle

(see the above photo) and angle

Now we have this two relations:

Since the only information to characterize the angle is the distance between the points, this could be heuristically generalized to metric spaces (keeping aware that the proof doesn’t hold, neither the notion of “angle” between vectors).

Researcher and engineer. Interested in Machine Learning, probabilistic models, mathematical modeling and many other applications of computational thinking. View all posts by Eliezer Silva